Blair had never paid for a professional massage before, but she was having a very stressful week, and figured she deserved a little self care. It seemed like Stacy was spending a lot of time working out the tension in her butt, but Blair ignored it, thinking she was just imagining things. When Stacy pulled down her panties, Blair thought, “oh this is a normal part of the massage right???”

It was very relaxing, and Blair was drifting in and out. She felt half awake, but was almost certain she saw Stacy rubbing her crotch out of the corner of her eye. Then Stacy took off her leggings, and started to finger her, “ok this is really happening, but I think I like it? This bitch is being SO unprofessional right now, but I’m definitely not gonna complain.” If anything, it made her relax even more, feeling free to moan as Stacy slid her massive dick inside her soft, warm, welcoming hole. As Stacy exploded onto Blair’s balls, she thought, “well there’s already oil and lube all over the place, what’s a little cum?” ¯_(ツ)_/¯

I was really excited to meet Sarayah Sin & Harleen Deville when they drove all the way from NY to AZ to see me, but no one told me that Sarayah was such a nerd. Its a shame really, a girl as hot as that. I’ve fucked some pretty uncool people in my life, but I do have SOME standards.

I’m not totally heartless though. I may not have let the subby slut fuck me, or her own girlfriend, but I did let her help us fuck each other. I told her to be our little eye candy while Harleen gagged on my cock. It was really hot watching cucky stroke her cock and shake her butt, while receiving nothing in return.

I also made her warm me up before I plowed Harleen’s heavenly ass. God its humiliating making a sub get my dick big and hard, when they know its gonna be stretching their partner’s hole next. I even throttled Sarayah’s neck while my huge cock was deep inside her girlfriend’s ass. After I dumped a hot load in the cool one, I even let lil cucky go in the bathroom and finish herself off in the dark. That’s especially pathetic when you consider that Harleen and I were snuggled up in my comfy bed, enjoying our post-coital cuddles at that very moment >:D

I love it when a submissive has been practicing for my cock, because I don’t have to be gentle. I can just start pounding their hole right away. He came to me as a man, and I dressed him like a good little sissy, but he doesn’t really lose his last shred of manhood until the very end of the clip, when I explode inside his lil sissyhole, and fill him up with a heaping helping of girljizz. You’ll have to save your load til the very end of the clip too, because when you see him finally give in completely, you’re going to want to close your eyes, and imagine its you finally becoming the real sissy girl you’ve always wanted.

I had so much fun on my recent vacation with babygirl Tasha Toxicity. She loves traveling with her Mommy, and its always so much fun sharing a fancy hotel together. After we checked in, I was ready to set down my bags and go visit the local tourist traps, but Tasha had other things on her mind. She really liked the comfy bed, it reminded her of some of her favorite Mommy-time activities. Of course I had to punish her for having such naughty thoughts, so I gave her a good spanking. Well I worked up a good sweat doing that, and had to take off my shirt to cool down. One thing led to another, and you guessed it, Tasha ended up getting exactly what she wanted: a nice big girlcock pounding her pretty little hole, followed by a creampie with some kisses and snuggling

Gather round perverts! I’ve got a true story to tell you, about the time I went to visit Portland, and I was staying with my friend, Ophelia Black. We had planned on filming a few clips together, but we were just 2 models, doing business as usual, in a very professional manner. On the train ride from the airport, I asked, “am I staying on the couch tonight, or is there an extra bedroom, or what’s the situation?” To which Ophelia replied, totally straight-faced, “oh you can chill in my bed if you’d like, its a Queen, so there’s plenty of room.”

Well after some drinks at the bar across the street, some dabs, and a bit of Overwatch, we both were getting tired. We decided to get ready for bed. Now you see, the thing is, I’m an Arizona girl, and I’m not used to that cold, cold Portland weather. So it was only natural that I scooched my cute lil butt over toward Ophelia, you know, cuz they’re just so soft and cuddly and warm and all. That’s what totally, completely, platonic friends do right?

Well that slut Ophelia, they must have took that as some sort of sign that I was DTF. I of course, did not want to be a rude guest, so I proceeded to dick them down proper, with all the skill and fervor appropriate for such a giving host. This included lots of spankings, spit, tit-slaps, dirty role play, and all the nice things well-behaved subs deserve. This continued the next morning, the next afternoon, the next evening, and so on, and so on, for the next 10 days. In fact, I dicked Ophelia down so good, that they became my P.A. for the entire trip, filming every scene, massaging me every night, and treating me to fancy dinners. They even came along with me when I took a train to Seattle, and kept me warm in my hotel for a couple of nights.

While in Seattle, a service sub treated us for a night out on the town. It was great! I had some wonderful seafood, a delicious cocktail, and then went back to her place. Over there, the sub shaved my legs, while Ophelia fanned me, and I watched one of my favorite sci-fi shows. Since the service sub had been so hospitable, I thought it would be nice to let her film this scene.

I was fast asleep late one night, until gal pal Johnny Starlight started sensually rubbing my body to wake me up. Half-awake, I rolled over to touch her soft supple breasts, only to realize she had already given me a massive erection. Immediately I feel her soft hands grasp my firm cock tightly, and she started to stroke it, up and down. Propelled by her desire, I reached down, and felt that she was as ready as I was. At that point, I lost all desire to fall back asleep lol. I kissed Johnny’s juicy lips, her neck, her breasts. When she started to nibble my nipples, the craving became just too strong, so immediately I thrust all 9 inches deep into her warm, wet, welcoming hole. Slowly, in and out, we enjoyed each other, and as the pace quickened I could feel my massive cock getting longer and thicker, stretching her tight slit. We fucked and fucked AND fucked! Oh god did we fuck, we only took a short break for me to lick up all her juices, and make-out with her soft, yummy cunt. After feeling her tight pussy gushing all over my cock several times, I just couldn’t hold back. I came so hard, the most mind-blowing orgasm, it left me completely drained, totally exhausted. I collapsed back on the bed and started to feel my eyelids getting heavy again. As I pulled her close to me, I could feel her snuggling her butt up against my crotch, and I drifted away into some erotic and sensual dream… 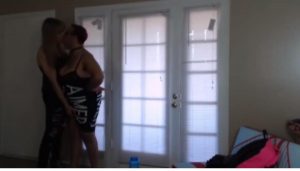 You need to be logged in to see the rest of this content .
A fair bit of photo gallery content and some video previews are available to free members but full/explicit videos require a premium (paid) subscription.
Please Login to or Register to see the rest.